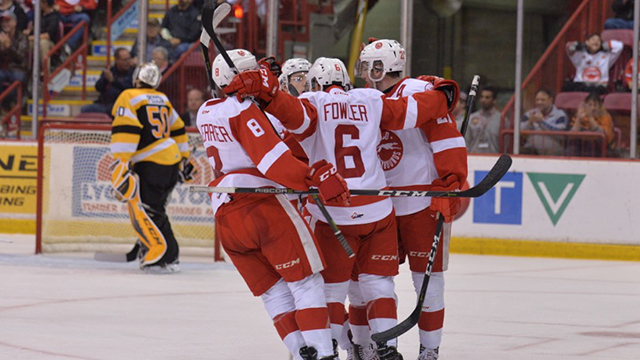 Having committed a trio of miscues which allowed the Kingston Frontenacs to eliminate a 3-0 deficit on Friday, the Soo Greyhounds refused to stagger.

The Hounds scored three of their own in the final nine minutes of the second period, and went on to beat the Frontenacs 6-5 before 3,607 at Essar Centre.

“We stayed calm and played as team. The unity on this team when things aren’t going right impresses me,” said Fowler, the Hounds first-round choice (19th overall) in the 2017 Priority Selections draft.

As for his two-goal performance, the 16-year-old (2001 birth year) centre said he felt “awesome. It’s a big weight off my back.”

“We let them back into the game, but after that we responded well,” said Hounds captain Tim Gettinger, whose club snapped a two-game losing skid and takes an 8-2-2-0 record into Sunday’s 2:07 p.m. home start against Guelph.

With the score 3-0 Hounds in the second period, defenceman Jacob LeGuerrier’s passing attempt hit a Kingston skate, popped in the air and flew to Linus Nyman, who beat netminder Tyler Johnson at the 6:35 mark.

And Anthony DeMeo also coughed up the puck, allowing Brian Laureigh to tie the game at the 8:06 mark.

But Fowler, a Kingston native, beat Frontenacs goalie Mario Peccia to put the Soo ahead to stay three minutes later.

He didn’t have to wait long for his second OHL marker, redirecting a Conor Timmins drive past Peccia at 11:49.

“Those are obviously mistakes we want to cut out,” centre Hayden Verbeek said of the turnovers. “But I like the way we responded. We battled back well.”

“If you take away the bad bounces and the turnovers, it was a pretty-good game for us,” said Hounds head coach Drew Bannister, whose club held a 27-26 edge in shots. “For 58 minutes, we were good. We played well.”

For the online box score of the game CLICK HERE.

UP NEXT;
The Greyhounds conclude their weekend, and the home stand, THIS SUNDAY (October 22nd) when they host the Guelph Storm.
Game time is 2:07 PM and proudly presented by Wawanesa Insurance.

Great seats are available by visiting the Essar Centre Box Office (presented by SK Group) Saturday 10 AM to 2 PM or Sunday 10 AM through game time, online anytime at www.essarcentre.ca or by phone at 1.866.775.9422.