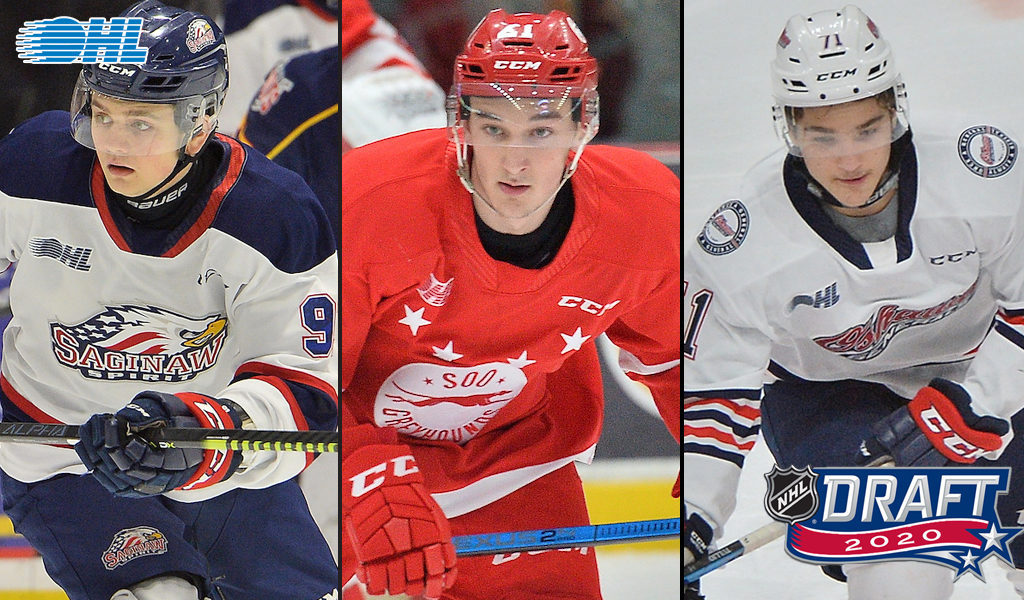 An impressive number of OHL players are lucky enough to be sharing the NHL Draft experience together this year, but a trio of them have been on the same path for awhile.

Before they were opponents preparing for this year’s unusual draft process, Saginaw’s Cole Perfetti, Sault Ste. Marie’s Ryan O’Rourke and Oshawa’s Ty Tullio were sporting the same jersey as members of the Vaughan Kings.

Back in January, upon facing off against each other at the Kubota CHL/NHL Top Prospects Game, O’Rourke and Perfetti spoke to the friendship that blossomed over their minor midget years and the friendly competition that comes with being drafted to West Division rivalry teams.

“We were always teammates growing up. The first time we ever played each other in our first OHL games, we both scored,” Perfetti recalled of their OHL debuts on Sept. 19, 2018 where they both found the back of the net for the first time on OHL ice.

“It was pretty fun. It was weird seeing him on the other team for a change,” the Saginaw Spirit centreman continued. “It’s been a nice competition going up against him every time we go in the corner, we battle extra hard against each other and try to give each other a hard time. We’re always in each other’s ears but that’s just good competition and a good friendship that we’ve had for years. It’s been a lot of fun playing with him and now playing against him.”

With poise and a patience to his game, @OHLHoundPower captain Ryan O’Rourke (@rorourke8) has been a dependable source of big minutes and is ranked 27th by #NHL Central Scouting.

During the two-day event in January, O’Rourke echoed his former teammate’s sentiments.

“It’s funny being division rivals. We play them so much, so it’s pretty cool,” said the Greyhounds defenceman. “He’s a pretty special player, and playing with him in minor hockey, you kind of knew that, too.”

The two played together on the OMHA’s Whitby Wildcats in 2016-17. The next year, they’d lace up for the GTHL’s Kings alongside Tullio, another future impactful OHL product, and the three of them would enjoy a trip to the OHL Cup final where they’d ultimately fall to the Toronto Jr. Canadiens.

Tullio, who plays in the Eastern Conference and therefore doesn’t get to face off against his former teammates nearly as often, cherishes that OHL Cup experience dearly.

It would be the second shot at the Cup for Perfetti and O’Rourke, who made it to the Quarter-Finals the season prior with the Wildcats.

“The OHL Cup was a great event and really prepared us for what it was like in the OHL and a great place to showcase our talent,” said Perfetti of the tournament.

“His vision, the hockey sense…I think he is one of the best playmakers in this draft.”@ESPN‘s @Chrismpeters breaks down the elite talent of @SpiritHockey centreman and top #NHLDraft prospect Cole Perfetti (@ColePerfetti91). #OHL Prospect Primer ?: https://t.co/sutVaM6jrW pic.twitter.com/EUtwThz4En

Preparing for what’s to come at the NHL level is the focus today, as all three skaters are gearing up to hear their names called at the upcoming draft set for Oct. 6-7.

The fifth ranked skater by NHL Central Scouting, Perfetti’s elite playmaking abilities have had him in the NHL Draft spotlight for awhile, especially on the heels of an 111-point season. He says he doesn’t pay too much attention to the noise and the rankings, however.

“I try to keep myself level-headed, push it to the back,” he said. “Everyone is a good hockey player, everyone in those talks is there for a reason. When I see a ranking that comes out and I think I can be higher, I just use it as motivation. And people that have me ranked a little higher, I just keep it level-headed and keep playing my game that got me to this position.”

When it comes to all the draft buzz, Tullio takes a similar approach.

“I don’t put too much thought on that stuff, I just take it day by day and hope for the best,” he remarked.

Tullio, ranked 52nd by NHL Central Scouting, prides himself on being a 200-foot player that coaches can rely on. He compares his game to that of the Boston Bruins’ Brad Marchand, in that he’s a smaller player who can make plays, score goals and play with a lot of heart. Upon hearing his name chosen by an NHL club, he’s anticipating, as he put it, “a ton of emotions.”

“It’s something I‘ve always dreamt of, it’s something that’s always been in our family, and for my sisters and parents to see me succeed, it’s not only going to be a special moment for me, but for my family as well,” said Tullio.

With standout speed, a strong work ethic and a winning attitude, Ty Tullio (@TylerTullio) has been a prominent piece of the @Oshawa_Generals‘ offence en route to the 2020 #NHLDraft ? pic.twitter.com/HQbAt2FDNn

When asked what’ll be going through his head during the big moment, Perfetti also made mention of his family.

With the intention of cracking an NHL roster as soon as possible, there’s really no telling how soon or how often the three of them will get to face off against each other at the next level. Until then, O’Rourke jokes that his friend and division rival still hasn’t been able to “get to him” just yet.

“I think in the two years we’ve played against each other, I want to say [Perfetti] hasn’t got me. He might say he’s got me once, but I think I’ve got him down pretty well,” he joked back in January.

And as they prepare for the biggest moments in their hockey careers so far, they’ll always remember taking part in that OHL Cup experience together; it was, after all, their first taste of the spotlight.

“It prepared us for what it was like to come in the NHL, being on TV, and stuff like that,” said Perfetti. “It got me ready.”