Division lead increased to 4 points with Friday win over Spits 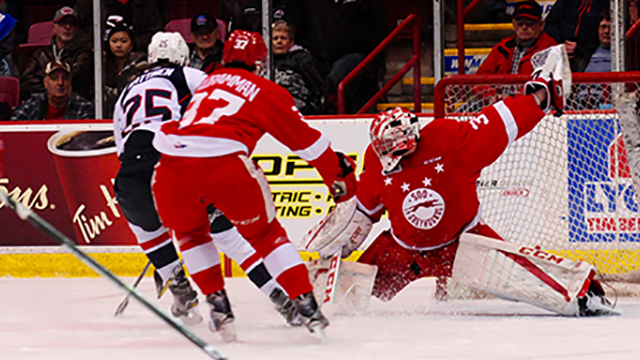 SAULT STE. MARIE, ON-
With the chips on the table, the Soo Greyhounds responded.

Returning to action after a full week of practice, the Hounds never trailed against the Windsor Spitfires and scored the final three goals of the game en-route to a 4-1 victory on Friday Night.

The win increased the teams lead to four points at the top of the West Division standings, with Windsor holding a game in hand.

“Obviously it was a big game for us, it’s a big win.  It gives us a little bit of separation room, they obviously still have the game in hand on us.  It’s important, one that we won in our rink, we played better hockey tonight and we beat a good hockey team” said Hounds Head Coach Drew Bannister when asked how big this win was for his club.

After the Hounds successfully killed off a penalty assessed just thirty-six seconds into the first period, they would eventually find themselves trailing 11-0 on the shot clock in the opening eight minutes.

But as they did on the night, the Hounds responded.

Just over the midway point the JACK KOPACKA took advantage of a Windsor turnover in neutral ice and sent the pass to BORIS KATCHOUK who skated up the right win and then backhanded home his 21st goal of the year (11:08) for the 1-0 lead.

JOSEPH RAAYMAKERS would help the Hounds take that lead into the first intermission not only by turning aside all 16 shots he faced in the period but an enormous save (SEE STORY PHOTO) with just over a minute to go.
A delay move by the Hounds at their own line resulted in a turnover and a saw Julius Nattinen go in along and be stopped by the netminder’s right pad.

The second period started with a flurry of whistles and icings but once things got going the Hounds, who had gained momentum in the first, continued to dictate play.

Windsor was limited to just eight shots in the period, four evenly in the first ten and latter ten minutes of the period but would tie the contest with a powerplay marker.
At 14:09, Jeremy Bracco was alone to RAAYMAKERS right and had time to pick his spot to the blocker side to make the game even after forty-minutes.
For the Windsor winger, it was his 1st goal in a Spitfire uniform in seven starts.

Just twenty-two seconds into the third period the Hounds BORIS KATCHOUK rang one off the cross bar after a clean face-off win by team Captain BLAKE SPEERS in the offensive zone.

But the lead would be regained minutes later as at the 2:58 mark, CONOR TIMMINS right point shot was redirected in front by DAVID MILLER for his 19th of the season, and a 2-1 Greyhound lead.

A lengthy opportunity presented itself to the Hounds to extend their lead a couple minutes later when Cristiano DiGiacinto was assessed a minor and then a subsequent bench minor put the Hounds on a 5-on-3 for a full two minutes.
And while they were unable to capitalize, the Hounds spent the full two minutes in the zone while testing DiPietro.

The insurance marker would come with under two minutes to play when MORGAN FROST pounced on a rebound and grabbed his 14th goal of the season, and first in eighteen games, to extend the Hounds lead to 3-1.
BOBBY MACINTYRE and ZACH SENYSHYN had the assists. 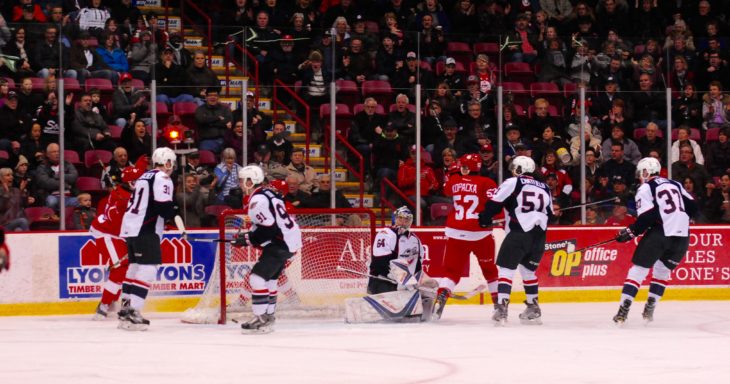 BORIS KATCHOUK (19:26) would add one more for good measure into an empty net as the Hounds won their third game of the season against Windsor.

“I thought we managed the puck fairly well.  Our execution on our exits were great.  We did an excellent job exiting the zone and it feeds our transition.  I thought we had a lot of guys do a lot of good things” he concluded.

The win improves the Hounds record to 33-11-2-1, good for 69 points, heading into tomorrow’s match-up with the Petes.

UP NEXT;
The Greyhounds are back in action TOMORROW NIGHT (Sat. Jan 28) against one of the top teams in the Eastern Conference, the Peterborough Petes.

Game time is 7:07 PM and is presented by Wawanesa Insurance.

Great seats are available by stopping by the Essar Centre Box Office beginning at 10 AM Saturday, order online at www.essarcentre.ca or by phone at 1.866.775.9422.

This game will also be televised on ShawTV starting at 7 PM.