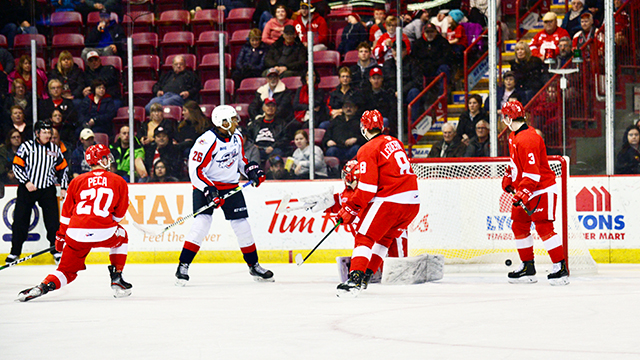 SAULT STE. MARIE-
What was a thoroughly-forgettable game for the Soo Greyhounds was an utterly memorable one for Windsor’s Daniel D’Amico.

The Caledon, Ont., native scored a career-high five goals on Friday, leading the Spitfires to a 10-4 whipping of the Hounds at GFL Memorial Gardens. Official attendance was 3,977.

“Hard to believe. I feel great,” said D’Amico, a three-year veteran, who had never before registered an Ontario Hockey League hat trick. “I didn’t hesitate to shoot and they were going in. I like playing in this barn and I just think I had the hot hand.”

While D’Amico and teammate Will Cuylle, who enjoyed his second career three-goal game, led the Spitfires celebration, the mood in the Hounds dressing room was predictably somber.

“We puck-watched when the puck was behind our goal line,” added Peca, who had two assists in defeat. “We also committed too many turnovers and that’s always a recipe for disaster.”

“Every mistake we made was huge and they ended up in the back of our net,” added Dean, whose team trailed 8-3 after 40 minutes and was outshot 36-34.

UP NEXT;
The Greyhounds are right back on the ice in another pivotal West Division / Western Conference match-up TOMORROW NIGHT (Sat. January 4) when they play host to the Sarnia Sting.

Game time at the GFL Memorial Gardens is 7:07 PM.