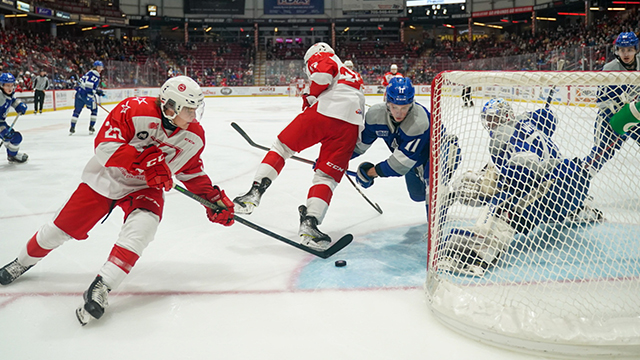 They were without suspended defenceman Ryan O’Rourke.

But while the captain’s absence was surely a factor, Soo Greyhounds head coach John Dean refused to use it as an excuse on Saturday.

Without the Minnesota Wild prospect, handed a two-game suspension by the Ontario Hockey League earlier in the day, the Hounds struggled in their own end of the ice. They eventually dropped a 6-3 decision to the Sudbury Wolves before 2,753 at GFL Memorial Gardens.

“Unfortunately, our D-zone coverage struggled,” lamented Dean, whose club fell to 1-1 after beating North Bay 4-1 on Friday in the 2021-2022 season opener. “There were three shots from the point where we didn’t pick up anyone in front of the net and they got sticks on it.”

Not tying people up, Dean continued, “left Sammy (goalie Samuel Ivanov) out to dry as far as I’m concerned. Our coverage in front was really poor and we didn’t block any shots.”

“Everyone, including myself, has to step forward,” said Jacob Holmes, who had two assists and was the Soo’s best rearguard Saturday.

Holmes spoke of how the Wolves like to get pucks deep, work low to high and funnel pucks to the net.

“We have to be better in the D-zone,” he added. “We weren’t boxing out and tying guys up.”

O’Rourke, one of the OHL’s top defencemen, drew a five-minute major and game misconduct for a check to the head in the win over North Bay.

“He takes a penalty, probably unnecessary, and that leaves us thin on the back end with a lot of first-year guys,” Dean said. “But that shouldn’t matter. One guy doesn’t make our hockey club. We need to step up and be a strong team.”

“I’m big-time disappointed,” said Hounds overage Joe Carroll, who replaced fellow OA Tye Kartye in the lineup on Saturday. “We didn’t manage the puck well and that cost us.”

Wolves defenceman Jack Thompson was outstanding, controlling play and finishing with a goal and three assists. Ryan Smith scored twice and set up another as the Wolves improved to 2-0 on a night when the Hounds held a 36-33 edge in shots.

“Jack’s just a consummate pro. He, Liam Ross and Chase Stillman, they carry us,” said Wolves head coach Craig Duncanson, whose club held leads of 1-0, 2-1, 3-2 and 4-3, before scoring twice in the final period to wrap things up. “And our best player at times was (goaltender) Mitchell Weeks.”

Carroll spoke of how he didn’t think the Hounds challenged Weeks enough.

“I didn’t like our start,” offered Dean. “That’s two games in a row I thought our start was poor.”

Giordano Biondi scored twice, including an empty-netter, while Ethan Larmand, on the power play, had the other Sudbury goal.

“I was pretty excited, especially to do it at home,” said Cloutier, a winger taken by the Soo in the first round (18th overall) of the 2021 OHL Priority Selections draft.

Having his father, Yves, and grandparents, Claude and Michelle Cloutier, in attendance made it extra special, he added.

“But it would have meant more to me if it came in a victory.”

Along with Ivanov, Dean also praised the work of centre Rory Kerins.

But, “obviously we could have played a lot better,” said overage winger Cole MacKay. “We got away from our systems and that cost us.”

The Hounds will seek improvement on the road next week. They begin a three-game trip on Thursday in Barrie, before taking on Guelph Friday and Owen Sound on Saturday. All are 7:30 p.m. starts.

“We’re just looking forward to a good week of practice and being better next week,” Holmes said. 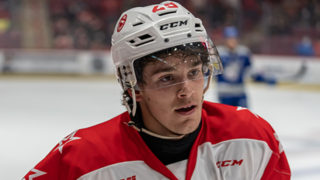 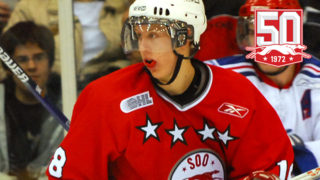 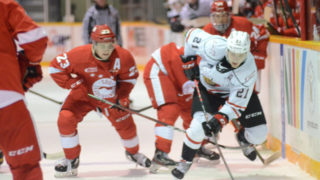 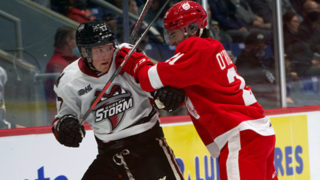 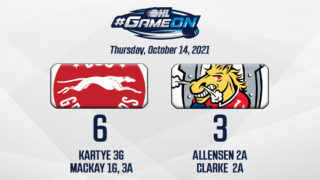