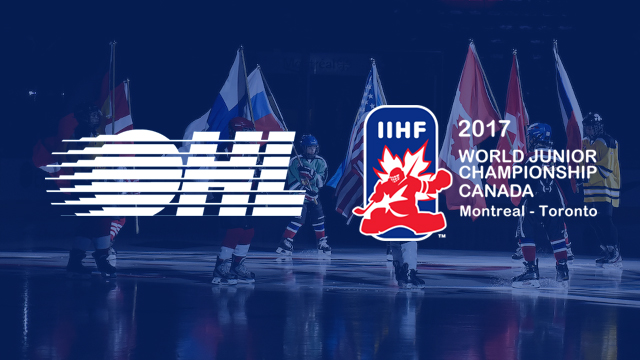 Toronto, ON – The Ontario Hockey League today announced that a total of 19 current OHL players are listed on official International Ice Hockey Federation rosters and are competing in the 2017 IIHF World Junior Hockey Championship in Montreal and Toronto.

The 19 players includes a representative from seven of the 10 participating countries including Canada who leads the way with six current CHL players followed by Finland with five players and Slovakia with three players.

In addition to the 19 current OHL players, three competing players are former OHL players, while 11 non-OHL players from Russia participated in the 2016 CIBC Canada Russia Series.

The 19 OHL players is part of a total of 55 from across the Canadian Hockey League which also includes 23 players competing from the Western Hockey League, and 13 from the Quebec Major Junior Hockey League.

11 of the OHL’s 20 clubs are represented in the event with two clubs including the Erie Otters and London Knights with three players each. The Mississauga Steelheads, Oshawa Generals, Saginaw Spirit and Windsor Spitfires each have two players competing in the event.

In addition, Christian Mieritz is a former member of the Guelph Storm.

In addition, Alexander Nylander was the 2016 OHL Rookie of the Year as a member of the Mississauga Steelheads.

In addition, Timo Haussener is a former member of the Guelph Storm.

For more information on Hockey Canada, Canada’s National Junior Team, and the 2017 IIHF World Junior Championship, visit HockeyCanada.ca or follow along via social media on Facebook and Twitter, as well as #WorldJuniors.